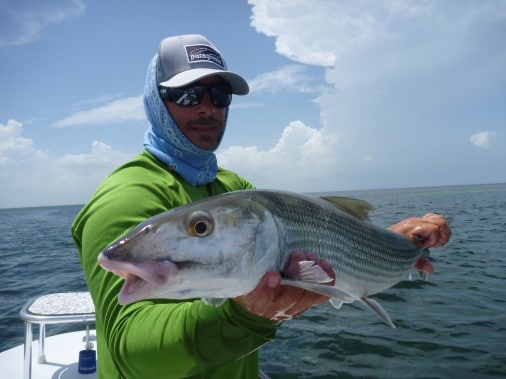 scocking@MiamiHerald.com
Last Wednesday began with doldrums on the flats of Biscayne Bay. Captain Raul Montoro, his friend Charlie Ellis and I scored multiple visual grand slams of bonefish, tarpon and permit. But spotting doesn’t mean catching, and even casting live bait, we couldn’t get anything to bite. Between full and new moons, calm and windless, the bay was as still as I’ve ever seen it. It seemed like the fish were as lazy and lulled by the late-summer heat as us humans.

But Montoro, 36, refused to give up. Poling his17-foot skiff across a broad, grassy flat south of Soldier Key, the eight-year veteran Miami flats guide predicted that fishing would improve with a little more afternoon sea breeze and an acceleration of the outgoing tide.

The wind began to puff at about 10 mph out of the southeast, a few clouds shrouded the sun, and the lackadaisical current gradually picked up speed as it exited the shallows. That’s when bonefish began to appear, cruising up out of the ocean onto the flats to feed on tiny shrimp, crabs and minnows being flushed by the tide.

Ellis cast a live, silver-dollar-sized crab to a group of three — one of which was so large that it resembled a small lemon shark. Montoro said the fish probably would go 12?pounds, considered a trophy anywhere in South Florida.

But the big one and its two companions gave the bait a cursory look and kept going.

A few minutes passed before a larger school of bones approached, probably 15 in all. Montoro told Ellis to cast out the crab again. But when it splashed the surface, the spooked fish scattered in all directions.

Standing beside Ellis on the bow and holding a light spinning outfit baited with live shrimp, I thought about casting to the fleeing fish. But after they disappeared in the surface glare, I figured it was useless. For one thing, I couldn’t see them. And what are the chances that a frightened fish is going to stop its warp-speed exit long enough to bite my bait? It’s never happened to me in more than 30 years of flats fishing.

I just flung the shrimp out in a Hail Mary as far as I could and let it sit on the bottom.

“He’s eating it,” I said in utter stupefaction.

Then the reel’s drag began to squeal, and in no time at all, probably 100 yards of 10-pound braid exited my spool.

The fish was blasting across the flat toward the edge of a deep channel — a daring and hazardous bonefish tactic intended to cut the line or leader on the sharp edge of a coral head or entangle it in a sea fan.

Montoro cranked up the outboard to chase the fish, as more line peeled off the spool. Even though this wasn’t a bluefin tuna or a tarpon we were after, it still was a wily opponent and there still was a very good chance I would lose it.

When we reached the channel, I managed to reel the fish close enough for Montoro to net it. He estimated it at 7?1/2 pounds.

We took several photos before Montoro returned it to the water and it swam away.

“I have never before cast to a spooked fish that actually ate the bait,” I said.

“That’s how I caught my biggest bonefish ever — 12 pounds,” he said.

You live, you learn. As one long-time guide once told me, “You meet somebody who says he has fish figured out, run the other way.”